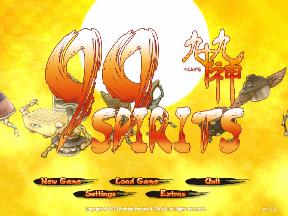 Yes, those weird things in the background are what you're supposed to fight.
99 Spirits, known as Tsukumogami in Japanese, is an RPG from the Japanese indie developer TORalKI and translated by Fruitbat Factory. It stands out by its original concept and unusual combat-system, as well as its atmospheric rendition of Heian-era Japan.
Advertisement:

The game stars Hanabusa, a young swordswoman who has dedicated her life to fight the Tsukumogami - everyday objects that have gained sentience or been possessed by evil spirits - in order to get revenge for her slain parents. Initially, she has little luck, since the Tsukumogami are Immune To Swords - the best you can generally hope for is to drive them off long enough to escape. But the Tsukumogami's numbers are rising steadily, to the point where they're effectively threatening the capital itself... something must be done.

Enter Komiya, a mysterious white fox who claims to be a servant of the mighty Mountain God. He delivers to her a magical blade called the Gokon Sword, which was supposedly forged by her parents - the only weapon capable of effectively fighting the Tsukumogami. Shortly afterwards, Tsukumogami seeking to steal the sword frame Hanabusa for the murder of an important nobleman. Thus begins Hanabusa's journey in earnest, as she battles the Tsukumogami hordes, seeks the favor of local gods, contends with corrupt nobles, and gradually unravels the truth about her parents.

However, all the power of the Gokon Sword will do her no good if it isn't used cleverly. Turns out that the secret to defeating the Tsukumogami is to reveal their True Form - by speaking their True Name. And in order to do so, you first need to figure out what the enemy you're facing IS - because until you know, it appears only as an indistinct blob of Miasma. With your sword, you must first extract hints about the nature of the item, and individual letters of the name, in order to guess the spirit's true nature. Thus, it carries some of the heritage of an old Edutainment Game, albeit done RIGHT.

Also, after a certain point in the game, you gain the ability to capture the spirit of Tsukumogami in your sword, in order to use their powers to solve puzzles or defeat their fellows. The result being an odd mix of Pokémon and a rummage-sale, and possibly the only game where you'll ever see the message "Pants captured!"