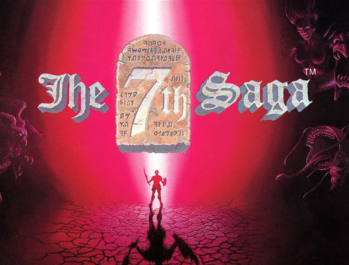 This is one of the stories that will be talked about for generations to come.
Advertisement:

The 7th Saga (known as Elnard in Japan) is an RPG for the SNES, released in 1993. It is known for one thing, and that is difficulty.

You choose your main character from one of seven apprentices: a fighter, a dwarf, an elf, an alien, a robot Tetujin, a priest, and a demon. Trained by the wise King Lemele, you must venture out into the oddly desolate world in search of seven Runes. Unfortunately, much of the story's flavor is lost in the English version no thanks to poor localization, translating its ambitious premise into dry Excuse Plot.

This game is notorious for the absolutely brutal difficulty and the nasty tricks it pulls on the player, most of which were exacerbated by Enix's bean-counting localization team. In an effort to pad out the length, they had a habit of jacking up the damage output and random encounters in their games, rendering some of them unplayable. The English version of 7th Saga is one of the biggest casualties of this approach. Blessedly, it was also one of the last.

A sort of spiritual successor, Mystic Ark, was released in Japan. Through the magic of console emulation, it has recently been made available to Western audiences via a fan-made English translation patch.