Get on the Boat 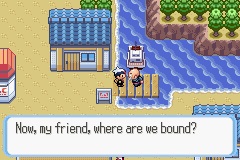 Doesn't it look a bit small for two people?
Advertisement:

In many RPGs, especially JRPGs, the time will eventually come when you've done all you can on the continent you start out on. Since you know that you're eventually going to have to visit every location on your Fantasy World Map, there's nothing to be done for it except to head to the nearest Port Town and find someone to ferry you to the next continent so that you can continue with the adventure.

The game will usually require you to perform some sort of Fetch Quest before it will let you get on the boat, and that's not all — there's a high probability that the boat either doesn't get there or eventually gets sunk after the first successful attempt. The ocean is one of the most natural Broken Bridges around, so game designers like to use it as one of the first Points of No Return in the game.

This is also sometimes a major mode of transport around the map, allowing you to travel across the world map much more quickly (possibly free of Random Encounters!). In this case, it will inevitably become obsolete once you acquire your Global Airship later on (unless you can still navigate and dock the boat in areas too dense for the Airship to make a landing — but these are few and far between). There are even a few cases where the boat is the Global Airship, but the player doesn't get the latter functionality until someone gives the boat a major upgrade near the end of the game.