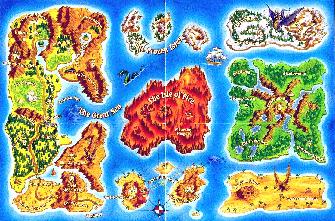 Every continent neatly in its grid.
"Law of Cartographical Elegance: The world map always cleanly fits into a rectangular shape with no land masses that cross an edge."
— The Grand List of Console Role Playing Game Clichés, Rule #45
Advertisement:

So you've gotten on the boat and want to explore the world. Perhaps you even brought a world map with you, and want to see where you're going before you actually get there. It's usually only a world map for the following reason: every land mass fits nicely within the square, never crossing the edges on either axis.

Since everything's placed in the center, the edges of the map serve one of two purposes:

Seen in almost any video game that uses a world map where the player can freely travel.

It should be noted that this trope can be blamed on actual maps of earth which also happened to be set up in such a way that the only land masses that actually cross over the edges are Antarctica and the Chukchi Peninsula. Of course, there is good reason for this since it'd be rather inconvenient to read a map that is cut in half but in any case, an acceptable break from reality.

Examples of the Looping World Map