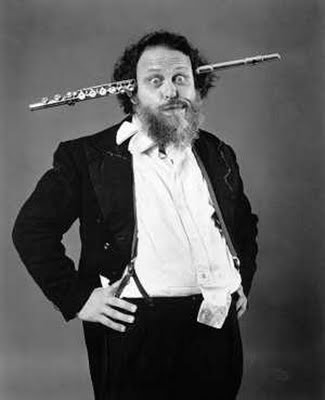 P. D. Q. Bach is a fairly obscure member of the Bach family (being the last, least, and certainly oddest of Johann Sebastian Bach's 20-odd children) who lived from 1807-1742(?). As with much of his family, he began a career as a musician; unlike much of his family, he was both Giftedly Bad and extremely prolific. After his death he was promptly forgotten by history, and most of his compositions were suppressed by the Bachs to protect the family name; what we do know of him is primarily the work of one Professor Peter Schickele (born July 17, 1935) of the University of Southern North Dakota at Hoople. Schickele has spent much of his career not only researching the life of this obscure historical figure, but also discovering his works and performing them for modern audiences.

...Okay, fine, you got us: P. D. Q. Bach never existed. Schickele made him up as a disguise for his own compositions, which are parodies of typical classical conventions and compositions. The results, though of questionable merit on purely musical terms, are unconventional, eclectic, and quite popular on the comedy circuit, performed anywhere from high school campuses to the Boston Pops, long-time seat of famed composer John Williams.