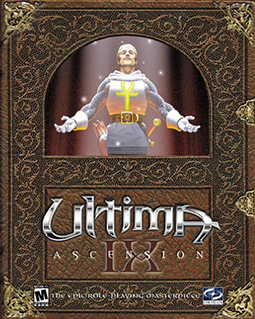 Your knowledge of the land shall be great!
Advertisement:

Ultima IX: Ascension (1999) is a video game, the ninth and final installment in the Ultima series of role playing games by Origin Systems.

The Avatar is called to Britannia one last time, where he discovers a series of monoliths have risen all across the kingdom, and the locals are acting very strangely indeed. It turns out that these towers are the doing of the Guardian, whose realm, Pagan, the Avatar has recently escaped from. It's down to you to defeat the Guardian once and for all... by making a Heroic Sacrifice.