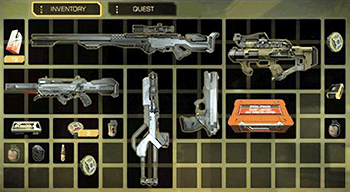 An alternative to the Hyperspace Arsenal. Instead of having an infinite amount of generic space to store things, or a simple numerical weight limit, you have a grid to store them in. The size and shape of objects varies; a key may fit into a single grid section, while a box of ammunition takes up a larger square of sections, and a rifle needs a long rectangle. Usually an object must always take up at least one section, no matter how small the object, so one's inventory can quickly become filled up with small things like keys and scrolls.

Weight is generally ignored in these systems. A gold ingot and a sheet of paper will take the same percentage of carrying capacity, even though the ingot is thousands of times heavier.

Prepare to spend a lot of time playing Inventory Tetris to fit everything. A few games have a button that automatically tidies up the inventory, but that's far from universal.

A Sub-Trope of Reduced-Downtime Features.