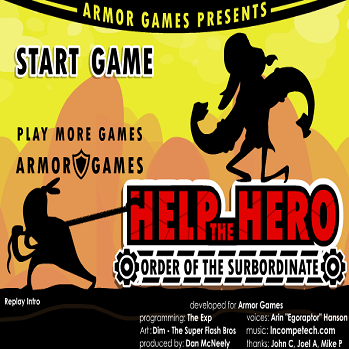 Help the Hero is a 2D Puzzle Flash game developed by the folks at Armor Games in 2011.

A humble village desperately needs a hero! Only one man is up for the job, Count Thrashwood, the greatest, most manliest hero the world has ever known. You on the other hand are his... trusty under-rewarded manservant Percival! Only you can handle his inventory and prevent him from being grinded into paste. Your job is to watch from the sidelines and manage what gets equipped, sold, or just thrown out. As they say, behind every hero is a story, and the people who helped him rise up to fame.

, was released by the end of 2011. Instead of a Puzzle Game however, it's a Zelda-like dungeon crawler starring the Scarlet Stranger ( secretly Percival) sieging Count Thrashwood's castle to Save the Princess.