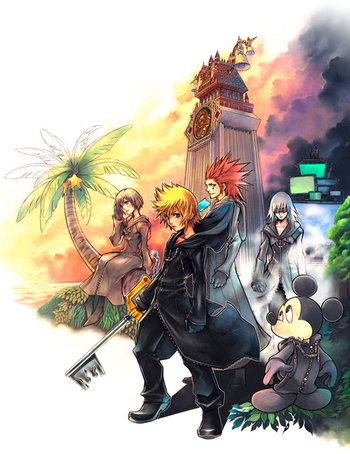 "Gotta hang on to something, right?"note Left to Right: Xion, Roxas, Axel, Riku, Mickey Mouse
"What mattered the most was remembered the least."
— Tagline
Advertisement:

Kingdom Hearts: 358/2 Days (read as Three-Five-Eight Days Over Two) is the oddly named fourth offering in the Kingdom Hearts series, released on the Nintendo DS in 2009. It is an interquel, taking place between Kingdom Hearts and Kingdom Hearts II and overlapping Kingdom Hearts: Chain of Memories at a few points. As the name suggests, the game takes place over the course of nearly a year.

A departure for the series, 358/2 Days stars Roxas, Sora's Nobody introduced in II, and his life as part of the unscrupulous Organization XIII. It also introduces Xion, a previously unmentioned 14th member that can also use the Keyblade and has an appearance similar to Kairi, Sora's Love Interest. Due to the game's seeming lack of a central antagonist and the Disney elements being heavily downplayed, it largely focuses on developing Roxas' friendship with Axel and Xion and characterizing the other Organization members.

358/2 Days uses an Action RPG system very similar to the console Kingdom Hearts games, but modified for the portable format. Rather than simply exploring worlds in one go, Roxas is sent on various missions by the Organization that require frequent visitations, with the plot unfolding as the missions are undertaken. Roxas's items, abilities, and spells are all equipped via a Grid Inventory that slowly expands as the game progresses, which leads to some minor Inventory Management Puzzle aspects.

There's also a local multiplayer option called Mission Mode that utilizes the Nintendo DS's wireless capabilties. Up to 4 players can team up to tackle altered versions of select story missions while competing for points, with options such as Friendly Fire to make things more interesting if desired. Every Organization XIII member is playable in Mission Mode alongside some Secret Characters like Riku, giving 358/2 Days the largest playable cast in the series at 19 characters.

The game was included as part of the Compilation Rerelease Kingdom Hearts HD I.5 ReMIX released on the PlayStation 3, though not with gameplay. Instead, the story is retold in a movie that lasts nearly 3 hours, making use of HD cutscenes, a new voice track, and occasional text breaks that give quick snippets about Roxas' daily missions. It also contains every entry from Roxas's Diary and the Secret Reports, which can be accessed after every cutscene has been watched.

While more details can be found in Swan Song on the Trivia page, the game is notable for being the final performance of Wayne Allwine as the voice of Mickey Mouse in any medium before his death in 2009.

Has a manga adaptation that is Lighter and Softer. A novelization is also available, and was released in English in 2018 by Yen Press.

The trope namer - in "Kingdom Hearts 358/2 Days," Saix has discovered that Roxas is planning to leave Organization XIII, but as he tells him, their group doesn't permit resignations. Roxas replies that he has nothing to say to Saix, so Saix tells him they'll make it short in sweet and engages him in battle in the hope of pounding him into submission.

Example of:
Resignations Not Accepted

The trope namer - in "Kingdom Hearts 358/2 Days," Saix has discovered that Roxas is planning to leave Organization XIII, but as he tells him, their group doesn't permit resignations. Roxas replies that he has nothing to say to Saix, so Saix tells him they'll make it short in sweet and engages him in battle in the hope of pounding him into submission.