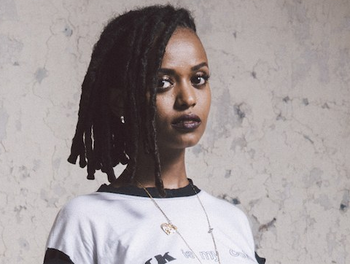 Let me know (it ain't that deep, either way)
Advertisement:

Kelela Mizanekristos (born June 3, 1983) is an Ethiopian-American singer and songwriter, known for her blend of classic R&B vocals and writing with futuristic, cutting-edge electronic production.

After working with several producers in the underground club scene, she released her debut mixtape Cut 4 Me to wide acclaim. In 2015, she signed to Warp Records and released her debut EP Hallucinogen. Two years after that, after having collaborated with people like Gorillaz, Danny Brown, Solange and more, she finally released her much-anticipated debut album Take Me Apart, one of the most critically acclaimed albums of the year 2017. On September 13th, 2022, she released "Washed Away", the first single from her sophomore album.

You better trope me apart: