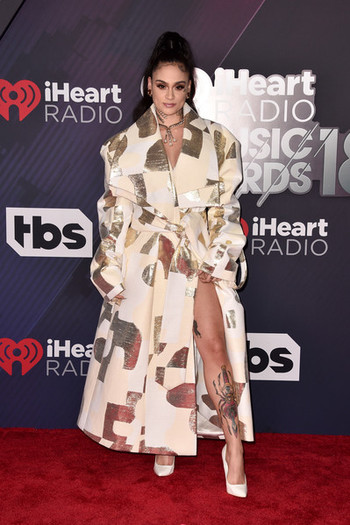 Kehlani Parrish
Kehlani Ashley Parrish (born April 24, 1995), recording mononymously as Kehlani, is an American singer, songwriter and dancer, signed to Atlantic Records. Kehlani is originally from Oakland, California, where they achieved initial fame as a member of the teen group Poplyfe.
Advertisement:

In 2019, Kehlani released their third mixtape While We Wait, to both critical acclaim and commercial success.

Kehlani has previously identified as bisexual, queer, and pansexual before coming out as a lesbian in 2021. Kehlani is also nonbinary, using she/her/hers and they/them/theirs pronouns, with a preference for they/them/theirs.

In an interview with Billboard magazine, Kehlani has described themselves as "mixed" (they are Black, White, Native American, Filipino and Mexican).

In a Billboard interview, Kehlani revealed that the origins of their name is Hawaiian, despite not being of Hawaiian descent at all.

Kehlani has one daughter, born 2019, from a past relationship with guitarist Javaughn Young-White.

Tropes Found In Kehlani's Music and music videos Include: