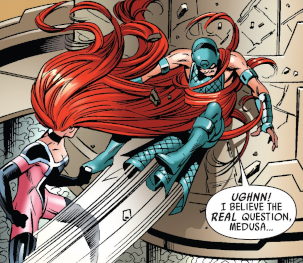 ... is how you get it to stay so silky smooth.
"Oh gross, he's gonna touch me with his hair!"
— La Belle, Charby the Vampirate
Advertisement:

Depending on the Writer, this can act as a Swiss-Army Superpower, and its strength ranges from forming a whiplash or picking up a spare weapon, to allowing characters to form extra arms, mallets, chainsaws, and throwing around boulders with a flick of their fronds. Depending on how it's used, Required Secondary Powers are necessary if the hair can support more weight than the wielder's scalp and neck.

A subtrope of Artistic License – Biology, as hair is, by definition, a filamentous outgrowth of dead cells from the skin. However, there are acceptable justifications such as Functional Magic, Bizarre Alien Biology, etc. Can fall under Bizarre Alien Limbs.

Compare Expressive Hair, which is when a coif is more inclined to telegraph emotions than to strangle random passersby — although there can be considerable overlap between the two. Even when this type of animate hair isn't in motion, it tends to look like its inanimate cousin Messy Hair.