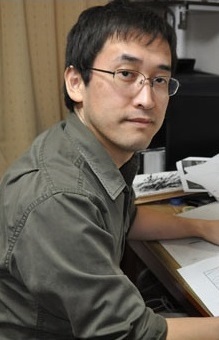 Behold, the face of terror.
The David Cronenberg of manga.
Advertisement:

Junji Ito (born July 31, 1963) is one of the top mangakas in the horror genre, his most popular works being Uzumaki, Tomie, Gyo and The Enigma of Amigara Fault. He also writes several individual short stories and a few short series, and despite his varied works, a few recurring characters pop up from time to time within these. Such characters include Souichi, a spiteful young boy with supernatural powers; Oshikiri, a boy who has several run-ins with parallel dimensions and other hauntings; and Fuchi, a fashion model whose behavior is even more monstrous than her physiology.

Ito used to work as a dental technician until the early 1990s, which probably explains a couple of things about his work.

His Tomie series have been adapted into a series of movies and TV specials, eventually followed by a movie adaptation of Uzumaki, and Gyo has received an anime adaptation. Later, a number of his short stories were adapted in the anime Junji Ito Collection by Studio DEEN in 2018.

Tropes commonly found in his works (and tropes specific to his miscellaneous works):