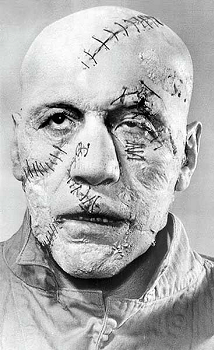 "You should see the other guy."
Advertisement:

In fiction, many creepy things need to have something unnerving about them, without going into outright gore or Scenery Gorn. The solution? Stitch it up! Stitches often carry unsettling implications, such as the notion that the being or object stitched together was never meant to be reassembled, or was cobbled together from different sources not meant to be combined; the idea that they resemble or close nasty scars; and that their conspicuous appearance connotes shoddy, off-putting repair, or merely looks out of place and strange when used stylistically.

This trope is often used in depictions of Frankenstein's Monster, but it's not exclusive. Many a Sackhead Slasher will also have some prominent crude stitching on his sack.