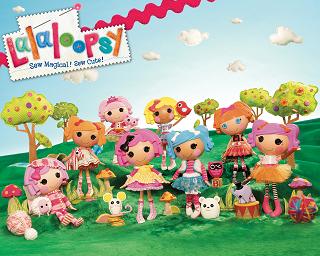 Sew magical! Sew cute! And sew NOT going to get a lot of praise from those who like Coraline and/or Identity V.note Clockwise from top left, Spot Splatter Splash, Jewel Sparkles, Dot Starlight, Bea Spells-A-Lot, Peanut Big Top, Mittens Fluff N' Stuff, Crumbs Sugar Cookie, and Pillow Featherbed.
"Lalaloopsy were once rag dolls that magically came to life when their very last stitch was sewn. Each doll has its own charming personality inspired by the fabric used to make it. Lalaloopsy live in a whimsical world full of silly surprises. With love and a little bit of imagination, you'll see why Lalaloopsy are sew magical... and sew cute!"
Advertisement:

A line of button-eyed dolls launched by MGA Entertainment in 2010, Lalaloopsy

quickly grew into one of the biggest toy trends of that year. From the original lineup of eight, the Lalaloopsy brand now carries over 25 original characters.

Animated Adaptations, such as webisodes, a Made-for-TV Movie and a short-lived TV series on Nick Jr. were made. A Continuity Reboot series was released on Netflix in January 2017 and lasted one season due to the toyline's cancellation that year...until it was confirmed Lalaloopsy will return August 2021 for its 10th anniversary, a comeback being hinted at with Lalaloopsy's appearance in MGA's 2020 Mega Gift Box Surprise set along with several of their other toys. There was also an official petition to have the franchise stay for good

You know you're a good sleepwalking when you can evade your alarm system in your sleep.

You know you're a good sleepwalking when you can evade your alarm system in your sleep.