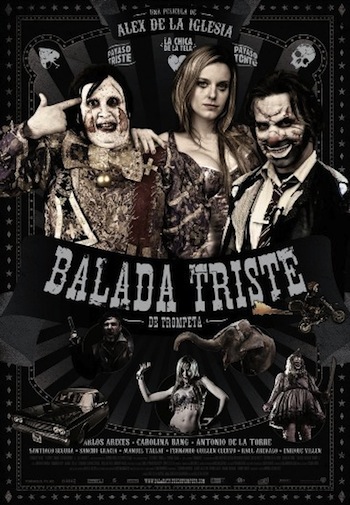 It's showtime.
Sergio: "Why are you a clown?"
Javier: "What about you?"
Sergio: "Because if I weren't a clown, I'd be a murderer."
Javier: "Me too."
Advertisement:

A 2010 Black Comedy directed by Álex de la Iglesia. In 1937, a clown is forcibly recruited by the militia to serve in the Spanish Civil War where he manages to massacre an entire platoon with a machete. Years later in 1973 against the backdrop of Franco-era Spain, his son Javier follows in his father's footsteps, working as a Sad Clown. There he falls in love with the beautiful acrobat Natalia and in the process runs amok of her abusive lover, Sergio, the Funny Clown. A twisted Love Triangle ensues between the two clowns that escalates into insanity.

Of all of Álex de la Iglesia's films (which include such twisted and weird fare as Accion Mutante and The Day Of The Beast), this is probably the darkest and most gritty. And that's saying something.