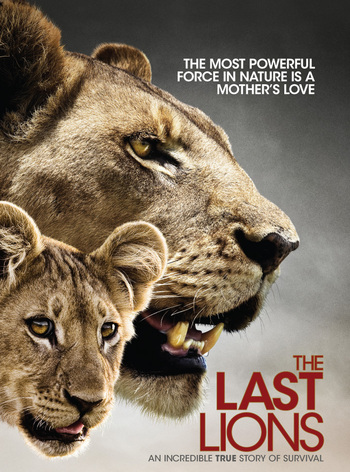 The Last Lions is a feature-length Nature Documentary produced by acclaimed wildlife filmmakers Dereck and Beverly Joubert for National Geographic Films, and released in 2011.

In Botswana's Okavango Delta, a lioness named Ma di Tau lives with her mate and their three cubs. One night, a rival pride arrives and takes over the territory, forcing Ma di Tau to flee with her young. Farther north, humans are encroaching on the savanna, so she ultimately sets down roots on the island of Duba. Hounded at every step by crocodiles, hyenas, angry buffalo, and a particularly aggressive lioness from the rival pride, Ma di Tau struggles to keep the cubs safe.

Throughout the film, we are reminded that lions in the wild are nearing the brink of extinction.

The film is narrated by Jeremy Irons, who had previously narrated several other films by the Jouberts, including Eye of the Leopard and Ultimate Enemies.

The Last Lions provides examples of: