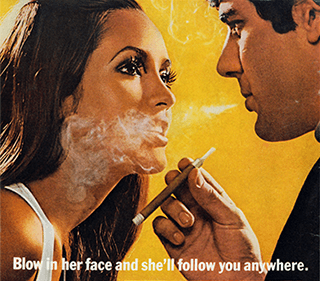 One character blows cigar or cigarette smoke in another character's face as an expression of defiance, dominance, or just plain jerkassery.

The person on the receiving end may react in a number of ways, from stoically putting up with it, to casually wafting it away, to breaking into a racking fit of coughing. In cartoons the cloud of smoke may dissipate to reveal an Ash Face.

A Sub-Trope of Good Smoking, Evil Smoking; this behaviour will generally be an indicator of an Evil Smoker, although a good Cigar Chomper may be able to get away with it (especially if the target has earned his contempt).

George Burns knows how to deal with annoying reporters.

George Burns knows how to deal with annoying reporters.