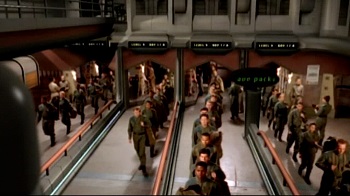 "No traffic, no complaints, no noise. Traders, troublemakers, and ambassadors all tucked snuggly in their little beds. I love this time of night".
—Cmdr. Susan Ivanova
Advertisement:

Ivanova is enjoying a relaxing night cycle, when the jumpgate suddenly activates and several Earthforce ships come through. Their commander, General Richard Franklin, comes aboard and speaks with Sheridan. He has 25,000 marines that he wants billeted for a few days. Sheridan asks if there's any relation to Dr. Franklin, and is informed that he is the general's son. Franklin will see him after his troops are taken care of.

The next morning, after the troops have been settled, Sheridan, Ivanova and Garibaldi head for their briefing. General Franklin is leading an operation on a planet called Akdor. The government there has asked for Earth's assistance in putting down a rebellion, and the general is using Babylon 5 as a staging ground. This is to be kept strictly confidential. The official story is that they are a relief force for Io. He also wants Sheridan's help in planning the assault since he's been to the rebel stronghold, a place called Matok.

He also explains that his techs will be installing new defense systems on the station. Earth Central feels that with the Narn and Centauri at war the other races may start getting more aggressive.

Lt. Keffer arrives at his quarters to find two men already in them. Pvt. "Large", a heavy black man who always has a cigar in his mouth, and Pvt. Yang, a young soldier on his first deployment. Keffer is not happy to find them there, and an annoyed Large gets up as though about to start a fight. Keffer isn't intimidated and Large is sufficiently impressed that he sits the pilot down, offers him a cigar and starts regaling him with war stories.

In his quarters, Stephen is talking to his father. He asks about his mother and sisters, and the general tells him how they are, and admonishes him to keep in touch with them more often. He then suggests having Stephen transferred to a post where he can be of use to humans. Stephen objects, he's quite satisfied with his work here, and their disagreement eventually escalates until the general storms out.

Later, Ivanova brings some soldiers to Medlab to make use of the beds there. Dr. Franklin objects, but, per his own report, no one is there who can't be moved. She senses something bothering him and offers to meet him later that night to talk about it. When they do, he lays out all his frustrations about growing up with a career military father. Ivanova listens, then tells him to talk to his father. She didn't and missed her chance.

In one of the station corridors, Delenn observes the number of Earthforce troops present, and Garibaldi gives her the official line. They talk a bit, about the war, and how Londo and G'Kar refuse to speak to each other, before Garibaldi goes off to see to a disturbance. Delenn walks off but encounters a group of belligerent soldiers who react angrily at the sight of a Minbari with hair. They advance on her, saying she needs a good lesson. Before they can do anything, a woman jumps between them, starting a fight which enables Delenn to get away. She quickly finds Garibaldi and tells him what happens. The fight is broken up by the troops' sergeant major, who is ready to cart all of them off but Garibaldi asks him to overlook this incident and he agrees.

Afterward, the female soldier who started the fight runs after him, asking why he did it. He tells her Delenn told him what she did. She introduces herself as Dodger, but before long, Garibaldi gets another call. She watches him walk off, commenting, "Nice butt."

Sheridan and Gen. Franklin are going over the layout of Matok. No matter how they do it, there will be heavy casualties, and Sheridan recommends calling it off. Franklin informs him that it's a tradeoff. If they win it, Earth can establish a military presence there, strategically close to the war. Their planning is interrupted when Stephen comes in, wanting to talk to his father. The general doesn't want to talk right now, and the two of them nearly start yelling at each other again. Stephen leaves in a huff. The general watches him go, then turns to Sheridan. They have a brief discussion about the nature of war and the role of the soldier and Sheridan speaks up on Stephen's behalf, saying he's a holy terror when his principles are challenged. This impresses the general somewhat. Sheridan says he also has disagreements with his father but they never stopped caring about each other.

Garibaldi is looking over things with Officer Welch when Dodger comes up. She asks him to show her around, and Welch says he can handle things. Garibaldi goes off with Dodger. That evening, they arrive at his quarters, kissing passionately, and steadily getting more intimate when Michael stops. He starts telling her about the lack of success he's had in relationships with women of late and tells her he doesn't want to screw this up before it even has a chance. Dodger gets angry. She wasn't looking for romance, she just wants to get some action in the time between fights, and she storms out.

In C&C Sheridan and Ivanova go over their status, their docking schedule is back on track, and the new defense grid is up. Babylon 5 is now as heavily armed as a warship.

The Franklins meet up again. They have a heart-to-heart and lay out the issues they've had built up over the years, Stephen hating not knowing if his father will come back from his next assignment, something the general admits he sometimes forgets about. Stephen finally tells his father he loves him and the two embrace.

Garibaldi finds Dodger again. She apologizes for getting angry, but something about the mission's bothering her. She can't believe they would send Richard "Firestorm" Franklin on a relief mission. Garibaldi, of course, can't tell her.

Meanwhile, Keffer is nearby with Large and Yang, when he runs afoul of Kleist, the soldier who threatened Delenn earlier, and a fight starts. It ends when General Franklin comes with the word that they're moving out. The sergeant major orders them to get their things and report to the docking bay. Garibaldi and Dodger say goodbye, as do Keffer, Large and Yang.

In the docking bay, General Franklin says goodbye to the command staff, sharing one more hug with his son, and some parting words. "Please, call your mother and sisters!"

Garibaldi moves down the line of soldiers looking for Dodger. He finds her and they share one more passionate kiss before the sergeant major calls her back to the line.

Several days later, a crowd is gathered in the Zocalo watching a report about the battle. After a scene of intense fighting, a live broadcast shows a reporter with Gen. Franklin. The battle was a success, and Matok has been taken, but good feelings die down as the casualty lists are brought in. Dodger, Large, Yang, and even Kleist were all killed in action. Garibaldi looks it over, then walks off leaving Keffer standing by himself.