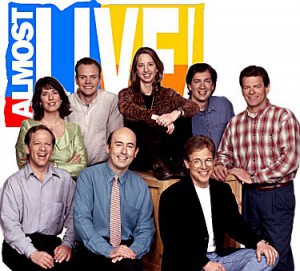 Almost Live! was a long-running television sketch-comedy produced in Seattle by the local NBC affiliate, KING-TV, channel 5. Lasting from 1984 to 1999; it started out as an hour-long talk/comedy show inspired by Late Night With David Letterman, including guest chat, music, and sketch comedy segments; and was hosted by local stand-up comic Ross Shafer, who would later go on to host Fox's The Late Show and the 1990-91 revival of Match Game. In 1989, the format was changed to a half-hour and focused almost entirely on sketch comedy (dropping the music and most of the chat segments); with staff writer and supporting performer John Keister taking over as host. For most of its run, the show aired every week just before Saturday Night Live. While much of the humor was aimed at local targets, an edited version of the show aired nationally on cable TV (briefly on Comedy Central in 1992-93), and more than one other show re-used some of its ideas.

Served as the springboard for Bill Nye the Science Guy's career. Joel McHale also did a stint on the show, but it took a little longer for him to reach the national spotlight. Ditto with David Scully, best known as Halo's Sergeant Johnson.

The Other Wiki has a comprehensive rundown