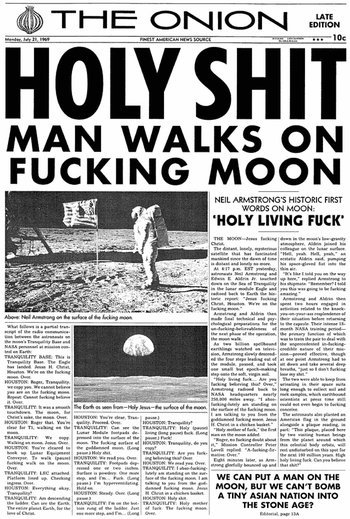 "The show you are about to watch is a news parody. Its stories are not fact checked. Its presenters are not journalists. And its opinions are not fully thought through."
— The Daily Show
Advertisement:

News presented with a satiric and snide tone.

May be the entire premise of the series, or constitute one segment within a Sketch Comedy, such as the "Weekend Update" segment in Saturday Night Live, or the "Laugh-In News" on Laugh-In.

Note that, although some of these shows give plenty of useful information, watching one is less effective than reading a newspaper, a warning which Jon Stewart in particular works hard to make clear. Whether watching the "real" news shows that these shows parody is effective at all is more debatable.

A variation is the Faux News show or sketch, which satirizes elements of legitimate news shows but doesn't use factual information. The best examples are the British radio show On the Hour and its TV adaptation, The Day Today, both of which feature writing and acting by Patrick Marber, who was later nominated for an Oscar for Notes on a Scandal. The Day Today had its own spin-off, Brass Eye, which spoofed the Prime Time News format. The most famous Faux News outlet in the US, on the other hand, is not on television: it's The Onion (which uses a mix of real and imaginary events), which has spread its tentacles to the Internet and other areas, as well. In the age of the Internet, a Shallow News Site Satire will often spread News Parody.

Not to be confused with Kent Brockman News, a Show Within a Show parody of news shows, or (as "Faux News") with a common pejorative for Fox News Channel.