Two Gamers on a Couch 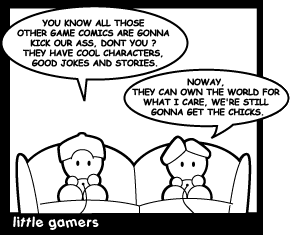 Why? Cause we're cute.
Benjamin: So, what do you think?
Mr. Vanderhoff: I think it's two chimps on a Davenport in a basement.
— Wayne's World
Advertisement:

Two Gamers On A Couch is an archetype of the Webcomics medium. Many of the most popular webcomics (and the people who read and write them) have an interest in Video Games, and the two gamers on the couch, playing games and shooting the breeze about whatever crosses their minds, is the purest expression of this fanbase/author background.

Two male friends, frequently Author Avatars of the artist and writer of the series, play computer games and have hijinks, mixing in political ideas and unexplained or explainable phenomena that surround their lives. Hilarity Ensues.

The two roommates/friends will often borrow from the archetype of the Straight Man and Wise Guy: One will be wacky and insane, whose passion for computer games and other aspects of nerd culture will result in stupid, crazy, illegal and (hopefully) amusing repercussions. The second will be more down to earth, calm and intelligent — not above being pulled into the wacky one's schemes, but usually knowing when to pull out. He usually has a stable, "normal" career whereas the wacky one will either be unemployed or painfully incompetent at whatever they do.

Sometimes this is expanded into a Comic Trio, when they are accompanied by one or more characters who provide context, perspective, or episode-specific references. These may range from a Snarky Non-Human Sidekick or a Dungeonmaster's Girlfriend to a Gamer Chick, Nerd Nanny, Robot Buddy, Monster Roommate, a Time Traveller, a character from the franchise being reviewed or any other unexplained supernatural or Sci-Fi element that serves as a plot device and may or may not change on a per-episode basis. Most of these series are set in the "real world" and these fantastical elements are handwaved as really cool.

Love interests as stand-ins for the authors' actual wives or girlfriends (assuming that the author has spoken to a girl in his life) are common as are actual Author Avatars who appear in one-off strips and comment on production or philosophical nonsense.