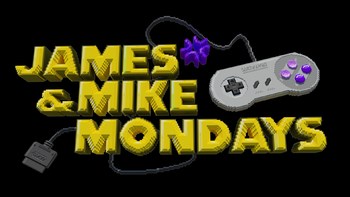 James & Mike Mondays was a web series where James Rolfe and Mike Matei play video games and comment on them. The show is similar to a Let's Play, only a bit more review-oriented. While they tend to favor older games, they occasionally play newer games too, and on the whole have covered a wide variety of genres and consoles. Unlike his Angry Video Game Nerd persona, James appears as himself in the series, and is much happier and more easy-going than the famous character he plays.
Advertisement:

The series started out in late 2012 and continued into 2013 as a series of irregularly-released videos. Originally known as James & Mike Play, it officially changed its name to James & Mike Mondays towards the end of 2013, and became a weekly series. It was created to fill the void between the longer wait of AVGN episodes, but became popular enough in its own right (interestingly, mirroring how AVGN itself started as a side project for James Rolfe but soon became his main focus as its popularity grew). While James and Mike usually play the games by themselves, they will sometimes have guest stars, including Doug Walker, Pat Contri, Bootsy (familiar to fans of Board James), Kevin Finn (co-writer of the AVGN movie and actor in several AVGN episodes), and JonTron, among others.

The series managed to keep up its weekly update schedule for an impressive seven years, up until its final episode in July of 2020. While they intended to only take a hiatus, the series has officially been cancelled due to Mike Matei leaving the channel.

The series playlist can be found here.