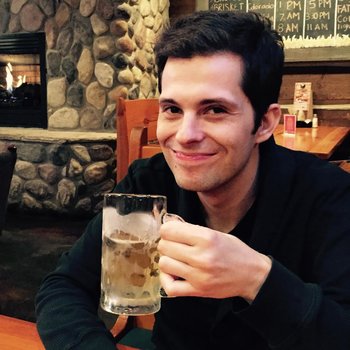 Mike Matei (b. 1980) is an actor, artist, YouTuber, streamer, and a former executive producer of Cinemassacre Productions, owned by his best friend James Rolfe, who he works with on writing, editing, and starring in a multitude of series.

Matei most notably works on Rolfe's famous Internet series The Angry Video Game Nerd, for which he co-writes, plays a variety of characters (Jason Voorhees, The Cowardly Lion, The Joker, Leatherface, Bugs Bunny, a Klingon, Michael Myers, etc.), and illustrated the title cards for episodes 5-100 as well as 139. Matei was also the one who encouraged Rolfe to upload the first AVGN videos to YouTube and make more of them, since at the time he only wanted to make a trilogy of them. Eventually Rolfe was convinced, and the rest is history.

Matei has also worked on different series of Rolfe's such as Board James, in which he has his own character, the cheating Jerkass Motherfucker Mike. Him and James have their own series, James and Mike Mondays, where they review various types of video games. Matei is the editor for James & Mike Mondays.

, with movie and game reviews, such as when Rolfe was away to California to film Angry Video Game Nerd: The Movie in 2012.

In 2015, he started playing video games on live streams and uploading them

to YouTube. They include Teenage Mutant Ninja Turtles, Zelda II: The Adventure of Link, Dr. Jekyll and Mr. Hyde, and many others.

He's also known, and rather infamous for, his skit video Minecraft With Gadget, which depicts him and an animated Inspector Gadget playing and reviewing Minecraft. The video has been subject to much Memetic Mutation, which likely comes from SiIvaGunner and OneyPlays' frequent references to it.

In December 2020, Matei left Cinemassacre (while remaining best friends with James) to focus on his video game streaming.