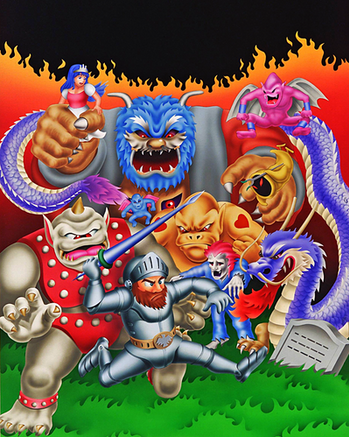 ''Man, it's cold outside on the fucking lawn!''

THIS ROOM IS AN ILLUSION AND
IS A TRAP DEVISUT BY SATAN.
GO AHEAD DAUNTLESSLY!
MAKE RAPID PROGRES!
— The text that appears when you beat the game the first time
Advertisement:

Ghosts 'n Goblins (known in Japanese as Makaimura, "Demon World Village") is a Hellishly-hard Platform Game from the 8-bit era, created by Capcom. It pits intrepid Knight in (and very frequently out of) Shining Armor Arthur against endless hordes of undead, demons, bats, and the titular ghosts and goblins in a quest to save his sweetie, Princess Prin-Prin, with only two hit points to his name.

As with many great titles of the time, it began as a quarter-muncher in arcades. It was followed by ports to various home platforms, including the ZX Spectrum, Commodore 64, Amiga, and NES. Later on, it appeared in updated form on the Game Boy Color, Game Boy Advance, and PlayStation, and in 2007 was released on the Wii Virtual Console. The arcade game is tough enough, but the Micronics port for the NES is miserably hard and riddled with glitches. Yet people still seem to love it.

It spawned a spin-off series starring a Red Arremer named Firebrand, loosely known as Gargoyle's Quest. The first game, Gargoyle's Quest (Red Arremer: Makaimura Gaiden), is a rare example of an Action RPG for the Game Boy. Gargoyle's Quest II (Red Arremer II) is a direct sequel for the NES. Demon's Crest (Demon's Blazon: Makaimura Monshou-hen, "Demon World Village Crest Chapter") for the SNES seemed to take inspiration from Mega Man X, with Firebrand morphing into new gargoyles with varying strengths and weaknesses (similar to X's armor upgrades). Demon's Crest came and went without any fanfare, but today is it considered one of the most underrated gems for the console.

Compare the Maximo duology (Ghosts to Glory and Army of Zin), which is a spiritual successor/spin-off starring an underwear-clad hero.

A costume based on Arthur appears as Downloadable Content in Super Smash Bros. Ultimate, while Arthur himself appears as a Spirit for those who have save data of Ghosts 'n Goblins Resurrection (and will be available to the public at a later date).

THIS SERIES PROVIDES. EXAMPULS OF:

CONGRATURATION
THIS STORY IS HAPPY END.
THANK YOU.
BEING THE WISE AND COURAGEOUR
KNIGHT THAT YOU ARE YOU
FEEL STRONGTH WELLING.
IN YOUR BODY.
RETURN TO STARTING POINT.
CHALLENGE AGAIN!