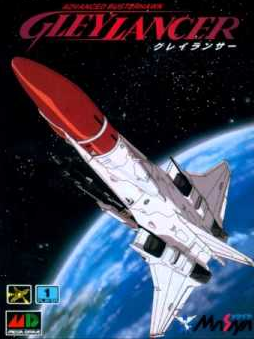 "Stick to it, and believe in your power!"
— The Gleylancer's onboard computer
Gleylancer (also called Advanced Busterhawk Gleylancer) is a side-scrolling Shoot 'em Up, developed and published by NCS Corp, and released in 1992 for the Sega Genesis. The game contains noticeably more story content than your typical shoot-em-up of the era, with a lengthy opening cutscene that can be viewed before the title screen, and more cutscenes seen after every few levels.
Advertisement:

The plot centers around a war between the Earth Federation and a race of hostile aliens, as the Federation forces find themselves outgunned with little choice but to withdraw their remaining ships from the battlefield, having already faced severe losses. Before they get the chance to mobilize the fleet, the aliens capture the Federation's flagship 'Oberon' by warping it into their territory with all the crew inside, including Admiral Ken Cabrock.

Ken's daughter Lucia, a Federation pilot, is beyond distressed by the news of her father's disappearance. She learns of a new starfighter the Federation is developing, the Gleylancer, of which a working prototype has already been made, but by the time it's ready for mass deployment, it may be too late for the flagship's crew. Desperate to save her father at any cost, Lucia hijacks the prototype Gleylancer and sets out alone to fight the alien menace.

The eponymous Gleylancer's main weapons are a pair of Gunner drones, which can be powered up with seven different weapons and aim in multiple directions, letting you shoot down enemies no matter where they attack from. When starting the game and after using a continue, you choose one of seven Mover Systems which determine how the Gunners aim and how you control them.