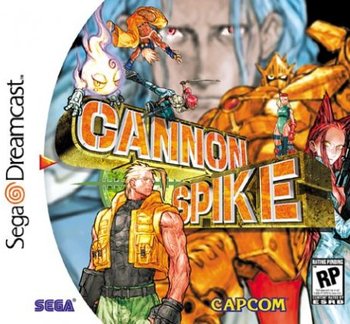 The Future needs YOU!
20XX A.D. A troubled world caused a surge of mass terrorism. With warfare spreading to every city, people live in constant fear...
Advertisement:

Cannon Spike is a 2000 shooting game from the Japanese developer Psikyo, done under license from Capcom. It holds the distinction of being one of the last games released for the Sega Dreamcast, and wasn't released in Europe at all until 2002. Despite reasonable exposure at the time of release, including a cover story

◊ in the enthusiast magazine GameFan, it's largely fallen into obscurity. Thankfully, now we can enjoy this title thanks to Emulation for Arcade (MAME) as well for Dreamcast (Chankast, NullDC, etc.)

As one might expect from seeing the name Psikyo, Cannon Spike is a twitch shooter. As one of seven characters - Cammy, Charlie, Baby Bonnie Hood, Mega Man, a futuristic version of Arthur, or original characters Shiba Shintaro and Simone - you blast through multiple Capcom-themed stages, firing guns on full-auto while zooming around on rocket skates, skateboards, or in B. B. Hood's case, an old scooter. Two-player co-op is available.

thanks to Wayback Machine. The Other Wiki made a modest article about this game here

. Also Capcom Wiki has an article about this game here