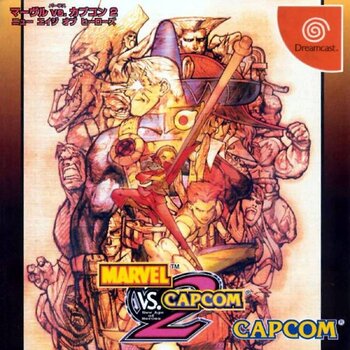 I wanna take you for a ride...
Advertisement:

It was the year 2000 and there wasn't really a justifiable reason to go to the arcades any more...except for Marvel vs. Capcom 2: New Age of Heroes, arguably the most popular game in the entire Capcom vs. series.

The plot? Oh, right. There is a plot. It's more or less the same story as last time: An evil wind is sweeping the land, creating a miasma that is killing all life. Ruby Heart, a dimension-traveling sky pirate, recruits Earth's greatest heroes (and villains) to track down the root of the problem: Abyss, the "Armor of Erosion."

This game is the final 2D entry in the Marvel vs. Capcom series; alongside all-new characters, every playable character from X-Men: Children of the Atom to the original Marvel vs. Capcom returns for one more round of fighting, bringing the total number of playable fighters to fifty-six — one of the largest rosters in fighting game history. The only absences are the vs. boss characters, the palette swaps, and most helpers from the previous game.

To accommodate the larger roster, MvC2 allowed players to select three fighters per team, allowing for different sets of assist attacks as well as Double (and Triple) Supers. It also introduced a gameplay mechanic where supers could be chained together for either absurdly long combos or safe, if costly, character-switching.

Capcom lost the Marvel license after this game, and both companies would follow separate routes until 2008. After massive fan demand (and the success of Super Street Fighter II Turbo HD Remix), MvC2 was re-released for Xbox LIVE Arcade and the PlayStation Network with online play. This reignited the Marvel and Capcom relationship, and in 2010, the companies announced that the game would get a true sequel in the form of Marvel vs. Capcom 3.

From 2021 onwards, the game has become the topic of intense discussion for a remastered revival with video game developer Digital Eclipse, known for remastering numerous Disney and Capcom games (including MvC2's 2009 release), having approached both Marvel and Disney regarding this venture. Though no news on a console port has arrived yet, Arcade1Up announced in August 2022 that MvC2 would be included in special themed arcade cabinet that compiles the entire Marvel vs. Capcom series up through it.

Brand-new characters (representing the Capcom side):