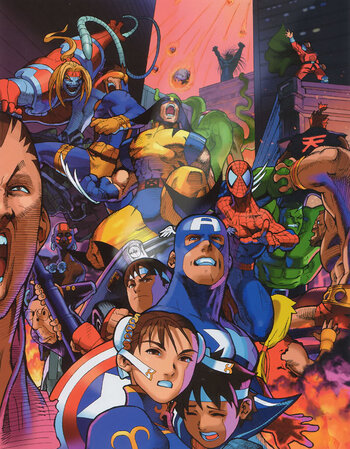 "Are you ready, True Believers? Capcom and Marvel have joined forces once again to bring you..."
"IT'S MARVEL SUPER HEROES VS. STREET FIGHTER!"
— Opening narration
Advertisement:

The Marvel roster retained Wolverine and Cyclops (and brought back Omega Red from Children of the Atom) and was extended with Captain America, Spider-Man, Shuma-Gorath, The Incredible Hulk, and Blackheart, all of whom were last seen in Marvel Super Heroes. The Street Fighter side was pretty much left alone, with the exceptions of Cammy and Charlie (who were replaced by Dan and Sakura). The game also featured a number of hidden character variants, such as U.S. Agent, Mephisto, an armored Spider-Man, and an alternate version of Zangief, Mecha Zangief, that couldn't block but had hyper armor (i.e. he was immune to hitstun) and could breathe fire — as well as Shadow (the result of Charlie being subjected to horrific experiments by Bison). The Japanese version also had an exclusive original: Norimaro, a Joke Character based on Japanese comedian Noritake Kinashi.

The gameplay remained mostly the same as the previous game, even using the same backgrounds from X-Men vs. Street Fighter, only remixed. This game additionally allowed players to call their partner in for an attack without switching out, which would become a staple element of the Marvel vs. Capcom series.

Apocalypse is still featured as a boss fight, but instead of fighting your partner after defeating him, the final fight is now against Cyber-Akuma, a cybernetic version of Akuma who appears to have been somehow transported from this continuity's Age of Apocalypse timeline after having been turned into one of his Horsemen.

Followed in 1998 with Marvel vs. Capcom: Clash of Super Heroes.