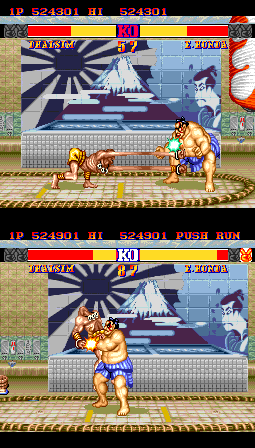 "Yoga Fi—ARRRGH!"
Someone or something who specializes in ranged combat, but is less effective against close-up threats.
Advertisement:

Such characters are likely Glass Cannons, with their range and damage being always feared as long as someone isn't next to them. This kind of Long-Range Fighter tends to be Difficult, but Awesome, as their strengths are useless if the player or their teammates doesn't manage to keep aware of enemy positions and keep them out of close-combat, but their advantages are very blatant when pulled off. As such, the risk of this character type being a Game-Breaker can be rather significant since one of the only things worse to suffer than getting easily killed is getting easily killed when you can barely see your enemy and can't hope to fight back. This will hopefully be mitigated by their opponents' tools (varying in many ways, from speed to close in to Smoke Out to cover them while they're far away), environment (usually by letting opponents Take Cover! and hope to flank the Long-Range Fighter), or themselves (such as their close-range weakness being very, very, very distinct) in some way.

Other examples can overlap with Fragile Speedsters, with their range and speed providing an obvious synergy. This character then usually has the drawback of low offensive power, leaving them only able to inflict Death by a Thousand Cuts; regardless, the Mighty Glaciers will probably wish losing to them was over with faster, and likely consider them Demonic Spiders. The Difficult, but Awesome degree of this character can vary over how easy it is to employ their speed and how generally easy it is to kill them in the game. A game of otherwise mostly close-combat will likely make using their strengths simple enough, while games with more easy-to-use range will cause playing this character to require more deliberation or reflexes lest they fall victim to projectiles (even errant ones).

Yet other examples, often seen in sci-fi settings, are Mighty Glaciers that sit back and try to shell opponents into submission and/or rubble with their greater range and firepower, while using their durability and clever positioning to shrug off return fire, but lacking the agility to bring its guns to bear on nearby, faster-moving targets who can whittle them down while they have no recourse but death on their own, leading to them to either operate in groups, providing each other cover fire, or with a escort of smaller, more agile fighters who chase off threats.

Another common version, more well known in Fantasy settings, doesn't do that much more damage than anyone else, have the ability to take it in turn, nor is particularly agile. What it instead specializes in, is utility and control, summoning allies, and disorienting foes with status effects to wear down enemies from afar while disabling their ability to get in close to begin with, or debilitating foes while they're already in melee with your own frontline, yet if caught up close, have difficulty gathering the energy to cast a spell while an assassin is at their throat or barbarian is bearing down on them.

In fighting games, this is encompassed by the "Zoner" or "Keep-Away" archetypes.

Opposite of Close-Range Combatant. Subtrope of Necessary Drawback and Competitive Balance.