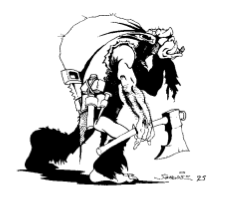 The core of every Command & Conquer Economy, the Worker Unit is ubiquitous on the battlefields of most Real-Time Strategy games, and even some Turn-Based Strategy and 4X games. It primarily serves two functions:

Some games may have different worker units for each task, some may have the same unit do everything. Often, the worker will also have the ability to repair damaged structures and mechanical units. Usually, it'll be cheap, unarmed or weakly armed, and fairly easy to kill, though some may have the ability to turn into Instant Militia or jump inside Garrisonable Structures to defend themselves. The worker epitomizes the idea of Boring, but Practical, being an essential component of your forces in every game, despite usually not doing much/any fighting. If you lose your workers, and lose the building which makes them, you generally lose the game, unless you already have an absurdly powerful army compared to your opponent (which is unlikely if an Arbitrary Headcount Limit is in place). As such, due to their relative vulnerability and value, they make good targets for hit-and-run harassment tactics. Taking control of an enemy worker sometimes allows you to construct the enemy faction's structures and units.

Usually armed with a Magic Tool of some kind. Allows for Easy Logistics, by allowing tasks that are fairly complex in reality to be performed easily, thus making an Acceptable Break from Reality. Workers are usually included as Starting Units, or at least, can be built without having to research anything.