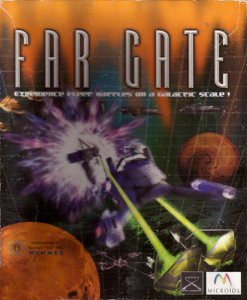 Far Gate is a 2001 Real-Time Strategy game for PC, developed by Super X Studios and published by Microids. It is focused on space combat, and features a Level Editor.
Advertisement:

A hundred years into the future, the player leads a group of human colonists in a war for survival against hostile alien forces and untrustworthy allies.