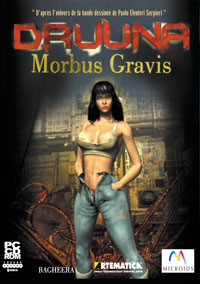 Don't get your hopes up, this porn-based game is 100% free of all sorts of lust.
Druuna: Morbus Gravis is a third-person perspective adventure game based on the comic of the same name developed by Artematica, published by MC2-Microïds, and released on 27 September 2001.
Advertisement:

A deadly virus is spreading rapidly, transforming the population into bloodthirsty monsters. The only person who can help your decaying city is the beautiful woman lying on a cot in your laboratory. Comatose, she is hooked up to a computer. The answers to what happened and why are locked inside her brain. Only by reliving her memories can you hope to save yourself and others.

Based on the writings and masterful artistry of Italian Paulo Eleuteri Serpieri, this Adult Adventure game follows the story from his book of the same name. It takes place in a chaotic, futuristic city, where Druuna, the voluptuous main character, lives. In 3rd person perspective, use your joystick or keyboard to manipulate Druuna and discover the secrets that will lead to the salvation of her city.