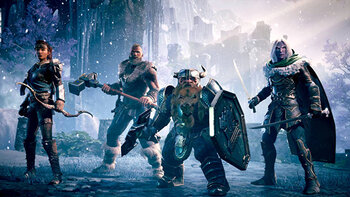 Set some time after the events of The Crystal Shard, armies of monsters have united and invaded Icewind Dale in attempt to find the powerful Crenshinibon and it's up to the Companions of the Hall — Drizzt Do'Urden, Bruenor Battlehammer, Catti-brie and Wulfgar — to save the day.

While the game has the Dark Alliance subtitle, the game has no connections with the Baldur's Gate: Dark Alliance duology outside of sharing the Forgotten Realms setting and Drizzt being playable in all three games (albeit as an unlockable bonus character in the former two).

The game contain examples of: