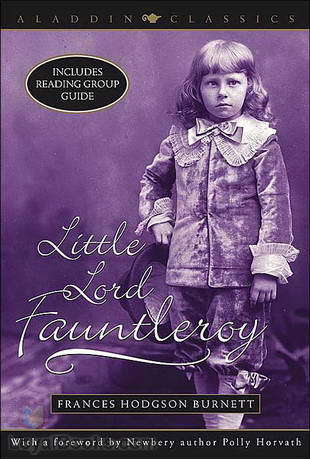 A children's book by Frances Hodgson Burnett, originally serialized in St. Nicholas Magazine in 1885, and published on its own in 1886.

Poor American boy Cedric Errol is a fatherless child growing up in New York City in the 1880s. It's revealed that he is, in fact, the sole remaining heir to the Earl of Dorincourt in England and has the title of Lord Fauntleroy. So Cedric is taken to England to live with the Earl, his grandfather, so that he can learn to be a proper noble. Cedric's mother settles nearby, but the selfish and bitter Earl refuses to acknowledge the commoner his son married.

Over time, Cedric's compassion, intelligence and devotion to social justice capture the Earl's heart, and the old man softens, eventually asking Cedric's mother to forgive him during a crisis that Cedric's friends help solve.

The novel was especially popular with women with small children, since Cedric's fine qualities are explicitly shown to be caused not by his heredity, but the loving relationship he has with his mother. It was quickly adapted for the stage, and Ms. Burnett's successful lawsuit over her rights in regards to theatrical performances established a precedent in copyright law.

It's been adapted for film several times (once with Mary Pickford in dual roles, simultaneously Dawson Casting as Cedric and Playing Gertrude as Cedric's mother!) and into an Anime series as part of the World Masterpiece Theater.

Tropes associated with this book include:

Tropes associated with the outfit: