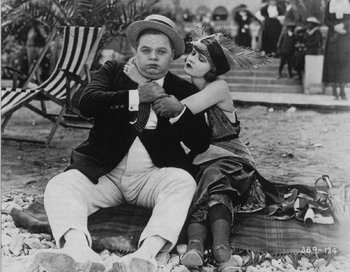 Stanley Piper (Arbuckle) is a wealthy young man who lives in a lavish mansion with his uncle Jeremiah. Stanley is in love with his uncle's nurse, Phyllis. When Jeremiah fires Phyllis in a fit of pique, Stanley asks her to marry him. Unfortunately for Stanley he has a reputation for being a "trifler" who falls in love with every girl he meets. Phyllis demands that he prove he isn't a skirt chaser. Uncle Jeremiah, in a misguided attempt to keep Stanley away from women, sends him on a "fishing trip" where there won't be any women—to Catalina Island

, which is packed with eligible young women.

"Leap Year" was a feature film, one of only a couple that Arbuckle made before the September 1921 death of Virginia Rappe led to Arbuckle being falsely accused of rape and murder. The film was shelved, receiving only a limited release in Europe in 1924. It is more of a romantic comedy than the knockabout slapstick Arbuckle was famous for, and is an indication of how he might have grown as a filmmaker if tragedy hadn't intervened. It was a Missing Episode in America for decades before receiving an art-house release in 1981.

Not to be confused with the Amy Adams rom com Leap Year. Oddly, does not feature Leap Day.