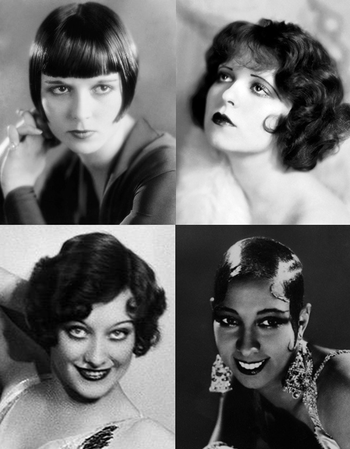 Different styles, same cut.note Clockwise from top left: Louise Brooks, Clara Bow, Josephine Baker, and Joan Crawford.
"Cut off all of your hair
Did you flinch, did you care?
Did he look, did he stop and stare
At your brand new hair?"
— The Lumineers, "Flapper Girl"
Advertisement:

If you want the audience to quickly place the timeframe that a work takes place in, the easiest way is to sprinkle it with the aesthetic that the timeframe is famous for. In the case of The Roaring '20s, few things are as iconic as The Flapper, and all flappers (at least, according to Hollywood) have bobbed hair, whether the Irene Castle windswept kind, the Louise Brooks shingle kind, the Josephine Baker Eton crop kind, the Clara Bow Quirky Curls kind, or the femme, wavy Joan Crawford kind.

A character wearing such a hairstyle will more often than not also be The Flapper, although she could alternatively represent another type of socially progressive woman. Because this was a time frame where women were expected to be subservient to men and Stay in the Kitchen, defying Long Hair Is Feminine was a powerful visual statement that the woman in question didn't subscribe to the then-accepted notions of a "woman's place." One side effect of this is that after the sexual revolution, the hairstyle has also become associated with dominatrices because of its outward authoritativeness.

In Japan, a short bob (usually paired with a kimono) is a nostalgic shorthand for the Taisho and pre-war Showa eras, when this haircut was massively popular with young girls.

Bobbed hair continued to be a trend in the 1930s, although the sleek shingles and Eton crops were pushed aside in favour of more feminine styles such as pin curls and Marcel/finger waves, which then be replaced by updos and pageboy bobs by the end of the decade. One simple way to distinguish 1920s from 1930s hairstyles is that the former focused on sleek and masculine, the latter on wavy and feminine.