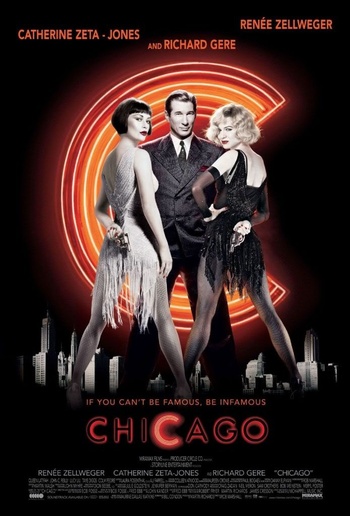 "In this town, murder's a form of entertainment."
—Mama Morton
Advertisement:

Chicago is a 2002 film based on a musical originally choreographed and directed by the legendary Bob Fosse in 1975. It is the story of Roxie Hart (Renée Zellweger), a wannabe cabaret star in 1920s Chicago. She sleeps around unbeknownst to her husband, Amos (John C. Reilly), but has a falling-out with one of her lovers, shoots him and is arrested for murder. In prison, she develops a rivalry with the star Velma Kelly (Catherine Zeta-Jones), who allegedly killed her own husband and sister.

Roxie, through bribing the prison warden, Mama Morton (Queen Latifah), gets the best lawyer in town, Billy Flynn (Richard Gere). Billy is a smooth-talking trickster who has never lost a case. As tensions mount and the papers make Roxie a star, fame begins to go to Roxie's head. But the press will love her even more if she is found guilty...

It is a satire of celebrity trials, the press, and show business in general.

♫ In fifty years or so
It's gonna change, you know
But oh, it's heaven
Nowadays ♫
Feedback

Kitty comes home to find Harry in bed with two women, and she responds like any scorned woman would.

Example of:
Death by Woman Scorned

Kitty comes home to find Harry in bed with two women, and she responds like any scorned woman would.