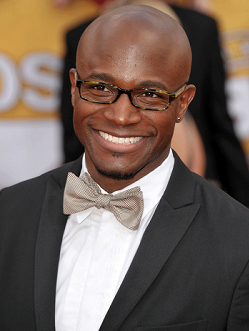 "Can I get a Taye Diggs, which is black and extra strong and smooth but also very sweet?"
— Laurie's coffee order, Cougar Town
Advertisement:

Scott Leo "Taye" Diggs (born January 2, 1971 in Newark, New Jersey) is an American actor. He first broke out in theater, originating the role of Benny in RENT (a role he'd go on to reprise in the 2005 film version). He then moved to film and television with roles in How Stella Got Her Groove Back, Guiding Light, and Ally McBeal. Other notable roles of his include Sam Bennett on Grey's Anatomy and Private Practice, and Terry English on Murder in the First.

Diggs was married to his Rent costar Idina Menzel from 2003 to 2014; they have one son.