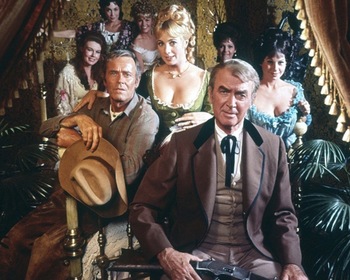 The Cheyenne Social Club is a 1970 comedic Western film directed by Gene Kelly—yes, that Gene Kelly, the song-and-dance man.

There's no singing and dancing in this one, but instead we get James Stewart and Henry Fonda starring as John O'Hanlan and Harley Sullivan, two grizzled old cowboys. They are busy roping steers in Texas when John gets a letter from Cheyenne, Wyoming, informing him that his long-lost, ne'er-do-well brother D.J. has died and left him a business in his will.

John goes to Wyoming to claim his inheritance and Harley goes with him. Arriving in Cheyenne, John is horrified to discover that his inheritance, the Cheyenne Social Club, is a brothel. The girls of the brothel, led by the warmhearted Jenny (Shirley Jones), were devoted to D.J. and become just as devoted to John, at least until they find out he's planning to close the Club. However, things get more serious when John shoots hoodlum Corey Bannister for roughing up Jenny, and Bannister's murderous family comes looking for revenge.