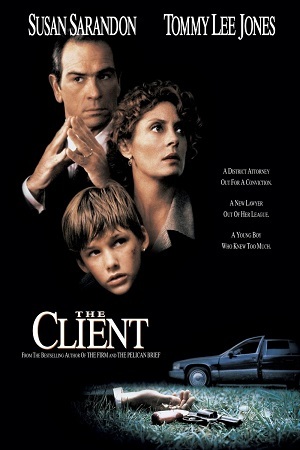 The Client is the name of a 1994 legal thriller film based on a 1993 novel by John Grisham. It was directed by Joel Schumacher, and starred Susan Sarandon, Tommy Lee Jones and Brad Renfro.

The story starts at a trailer park in rural Tennessee, where two boys are seen sneaking away. Mark Sway (Renfro) is a streetwise 11-year-old and a habitual smoker. He is now about to teach his younger brother, Ricky (David Speck), how to smoke. They are in their woods by themselves when a black Cadillac suddenly parks at a short distance from their location. It belongs to W. Jerome "Romey" Clifford (Walter Olkewicz), a financially secure lawyer from New Orleans. Clifford was looking for a sufficiently isolated location to commit suicide. He thinks this one ought to do.

Mark realizes what is going on and tries to prevent it. A frustrated Clifford captures him and explains that this is pointless, as he is effectively a Dead Man Walking. It seems the lawyer has ties to organized crime and was currently involved in a high-profile case. His client Barry "The Blade" Muldano (Anthony LaPaglia) is accused of murdering Senator Boyd Boyette. But the corpse of the victim hasn't been found yet. There is one man other than Muldano who knows of its location, Clifford himself. Clifford narrates in detail the instructions for the location given to him. The problem is that prosecuting attorney "Reverend" Roy Foltrigg (Jones) has figured out Clifford knows and is pressing him hard for the information.

If Clifford keeps his mouth shut, he is going to be accused of withholding evidence and faces incarceration. If he does talk, Muldano is going to arrange for Clifford to be murdered. The lawyer has figured it is Better to Die than Be Killed. Not long after, Clifford blows his brains out. Ricky is traumatized, but Mark has faced such situations before. He immediately calls the police, who soon determine Clifford and the boy shared the car for a while. Mark has just inherited Clifford's problem. Everyone figures the lawyer had confessed to him the location of the missing corpse. Foltrigg places him in custody until he talks, Muldano places a price on his head.

Mark knows that in situations like this, you need a lawyer. Unfortunately for him, he can't afford any particularly established lawyer. Placing his trust in Reggie Love (Sarandon), an inexperienced lawyer with a history of substance abuse. Mark finds that a bit too reminiscent of his hated father to completely trust her.

The film gained a spin-off television series, The Client (1995-1996). It lasted one season, 20 episodes. JoBeth Williams was cast as Reggie and John Heard as Roy.