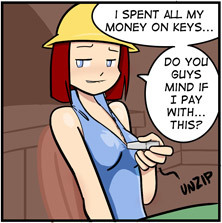 "Then let me keep it simple: once a month on the full moon, you return the book to me, followed by a night of passionate fornication. Aaaaand you get to keep it for the rest of the time, hm? Sound fair, my little imp?"
—-Stolas, Helluva Boss
Advertisement:

The act of trading sexual favors for non-sexual favors: having sex with someone you wouldn't want to have sex with "for free" — or even if it's someone you would do "for free", you let them believe otherwise — in exchange for gifts, doing work for you, or the like. The whole thing may or may not be portrayed and/or perceived as really being a form of prostitution.

This trade may be portrayed in a neutral manner, or it may portray either the sex-trader or the service-trader as more or less a victim of the other. In either case, the act is often closely related to at least one other trope.

Neutral versions (As in, they are either equally good or equally bad)

While one can certainly consider this a form of whoring, the sex-trader rarely intends to make an official career out of The Oldest Profession from making deals like this. The various uses of this trope are all Truth in Television, though not universal and some occur more than others. Compare Pragmatic Pansexuality. Contrast Platonic Prostitution, where one partner is a prostitute but they don't have sex. If a person perceives having sex as something they do solely for services and has hangups having sex with someone they're emotionally intimate with, this can be a variant of Romance and Sexuality Separation.