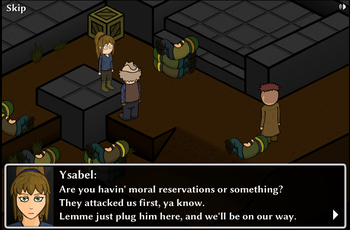 The "heroes" of the game, and the casualties of their first battle.
"As we enter the Age of Despair, the situation looks dire indeed for Tevoran and Company. Tragedies befall us without cease, and fickle fate grants us no reprieve! My endeavors have all come to nought! Gambling dens, a male escort service, even slunk trafficking! Fortune can only frown upon my efforts. Now I sit here in abject poverty, with scarce left to eat save for a miserable pot of cabbage-water. I fear I may even have to seek legitimate employment..."
— Edwin Tevoran
Advertisement:

World's End is a series of Flash Strategy RPG games created by Mezzanine Stairs. It's notable for its dark humour and flexible gameplay mechanics, allowing a wide range of tactics.

So far three chapters have been released, the first one

All chapters provide examples of the following tropes: