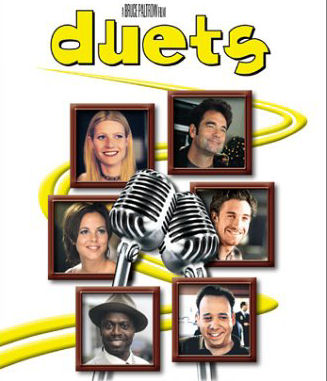 A middle-class salesman who's grown disgusted with the culture of corporate America.

An ex-convict who has nothing but his gun and his voice.

A cab driver that once believed in the inherent good of the world, until he found his girlfriend cheating with his business partner.

An amateur singer trying to make it to California who is willing to do anything... anything... to get there.

A conman who lives only for himself and the road, suddenly reunited with his estranged daughter.

An innocent young woman who would give the world to win the love of the father that abandoned her as a child.

Duets is the tale of six people who, despite their disparate backgrounds, share one things in common: a crushing despair about the course their lives have taken. Though they are scattered all across the United States, the threads of their lives begin to intertwine as they progress through a nationwide karaoke tournament. Inexorably they are all drawn to a single point... the national championship in Omaha where they will compete for the grand prize of five thousand dollars and, each in their own way, search for the meaning that has eluded them for so long.

Duets is a Road Trip Plot directed by Bruce Paltrow. It stars Paul Giamatti, Andre Braugher, Scott Speedman, Maria Bello, Huey Lewis, and Gwyneth Paltrow (the director's daughter, in their only screen collaboration). The film saw a theatrical release in September of 2000, and was distributed by Hollywood Pictures.