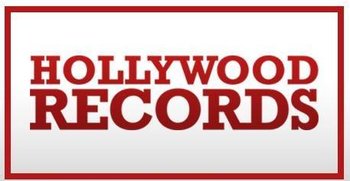 Hollywood Records, Inc. is a record label owned by Disney. The label has released a number of records from artists of various genres throughout its history. It is perhaps best known though for releasing albums from a number of Disney Channel stars. It's something of a Spiritual Successor to Buena Vista Records, the small pop label Disney operated in The '50s and The '60s.

The label was formed in 1989 by Michael Eisner, who sought to expand Disney’s music operations and develop a roster of talent from various genres. They had an early success by signing Queen in 1990 and has since remained the distributor of their catalogue in the United States and Canada, including its members’ solo catalogues. They still remained in a financial rough patch during the 90s and early 2000s, only gaining a few hits from even their more established signees, not helped by Queen's huge pause on studio activity in the wake of Freddie Mercury's 1991 death. That changed with the release of Hilary Duff’s second album Metamorphosis. Duff at the time was the star of the Disney Channel hit program Lizzie McGuire and the success of the album (which has since gone 3xplatinum) led to a business model change for the label. The label would support acts who were features in other mediums Disney had a stake in, particularly the stars of Disney Channel shows and movies, and help use their success to launch and develop successful music careers. For example, many of them tend to have prominent airplay on Radio Disney. This strategy has helped the label earn additional gold and platinum certified records from artists like Miley Cyrus, Selena Gomez, The Jonas Brothers and Demi Lovato.

Even with the success of their Disney channel acts, the label has still remained home to a number of artists who haven’t been regular fixtures of Disney related projects. These musicians have included Breaking Benjamin, Plain White T’s and Grace Potter. Hollywood Records has also distributed numerous soundtrack albums, typically for films distributed by Disney. Starting with The Avengers (2012), they have released all of the Marvel Cinematic Universe film soundtracks in conjunction with Marvel Music. The label also releases soundtrack albums from 20th Century Studios and Searchlight Pictures since their acquisitions by Walt Disney Studios.

Hollywood Records also had a Hip-Hop subsidiary formed in 1990 called Hollywood Basic but folded in 1995 after Hollywood had a switch in distributors which resulted in all of Basic's recordings getting deleted. A notable exception was the catalog of cult East Coast rap duo Organized Konfusion, who took their masters with them after it folded. Other notable artists on Hollywood Basic included Boo-Yah T.R.I.B.E., Lifers Group, and the very early work of DJ Shadow. Some other releases in Hollywood Basic’s short history included Rick Rubin’s polarizing remix of Queen’s “We Will Rock You” and the soundtrack of South Central.

From 1989 to 1995, the label was distributed by Elektra Records, ironically owned at the time by Disney's top rival, Warner Bros.. They then switched to Polygram, which later merged with its parent, Universal Music Group. Hollywood and Universal would later expand their relationship in 2013 to allow Hollywood signees to collaborate with producers and songwriters who worked for Universal. Considering that Queen initially left Elektra in 1984 as a result of their gradual phasing away from WEA in the US in the wake of the controversial 1981 Warner Home Video rental drive and Elektra’s dissatisfaction with the disco sound of Hot Space, the fact that they'd go on to sign with a label that was distributed by Elektra at the time is amusingly ironic.

Between 1997 and 2006, Hollywood Records also owned the formerly independent Mammoth Records label. They also operated a Country Music division known as Lyric Street Records between 1997 and 2010.

Hollywood Records performers and productions, past and present, with TV Tropes pages: