Battle in the Center of the Mind 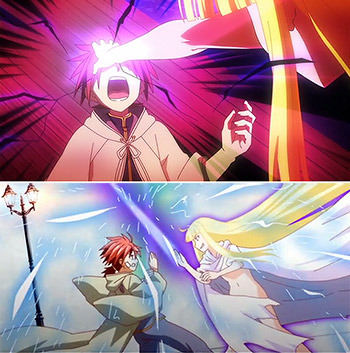 "...You are now at war within your own mind and body."
— Uncle Iroh, Avatar: The Last Airbender
Advertisement:

One of the basic building blocks of storytelling is a character's inner struggle, their efforts to balance their base urges and lofty ideals. This is not conducive to high octane explosions and fist fights, nor is it easily transmitted in television even by serious series. However, toss in demons, Mind Control, and a Journey to the Center of the Mind, and you'll get a Battle in the Center of the Mind.

What ends up happening is you get the mental equivalent of a no-holds-barred psychic showdown between the evil force trying to take over and the owner or his/her allies. The evil force can be of various natures, including: Demons, Ghosts, an evil computer virus, other humans via Mind Control or the self with an Enemy Within or Superpowered Evil Side. What the possessing force wants is either a full Split-Personality Takeover, or (if external) to maintain control.

Opposing this force is usually the "host" or person that is being affected. Occasionally, their mind is too weak and addled to oppose the invader, so a friendly telepath or mystic will insert an ally or two to try and rout the bad guy. They will fail. However, the act of them trying and yelling "I know you are in there somewhere!" and going in to save them from the evil presence in their mind is usually enough to get the host to kick their unwanted guest out of their mind if not completely obliterate it when it threatens their friends. The thing is, no matter how powerful the invader, it can't beat a determined victim's home brain advantage.

The fight itself will usually use highly symbolic weapons (a chef's ladle now doubles as a BFS), defenses (a security blanket can now block Ki Manipulation) and even imaginary allies (summoning up an army of Supermen to help you out), turning into something similar to a Shapeshifter Showdown.

For those on the outside, it's usually obvious that the character is Fighting from the Inside.

Sly has to battle the Panda King within the latter's mind via the Guru's magic.

Sly has to battle the Panda King within the latter's mind via the Guru's magic.