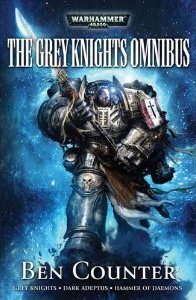 A Warhammer 40,000 series by author Ben Counter about the titular Grey Knights chapter of Space Marines. It follows the exploits of Justicar Alaric and his squad battling various daemonic and chaotic enemies of the Imperium.

Note: Examples on this page should only cover tropes from the Ben Counter’s Grey Knights novel series, not events from other Black Library novels that feature Grey Knights, or information from the game’s sourcebooks.

Tropes connected with the Grey Knights book trilogy are: