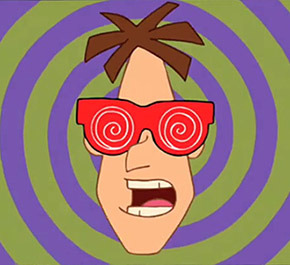 His name is Doof and you'll do what he says. Whoop Whoop!
Advertisement:

A stock visual effect that is usually used to indicate someone is being hypnotized (or trying to hypnotize someone). It does get used for all sorts of hallucinations and visualized breakdowns but it's primarily associated with hypnosis for some reason.

The common version tends to include:

Grandma Taters' way of forcing everyone to be happy.

Grandma Taters' way of forcing everyone to be happy.