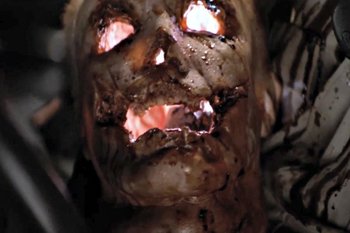 They were running out of pumpkins this year so I had to improvise, all right?
Advertisement:

Jack-o-lanterns are an iconic symbol for Halloween, just as decorated pine trees are symbols for Christmas. However, in more horror-centric works, there is a way of turning this common decoration into something horrific: having the lantern be made from somebody's head.

So, how does one usually do this? Well, it's simple! First, kill somebody and cut their head off. Then, make a hole or remove part of the skull in order to scoop out the brains. Next, feel free to carve up the head, maybe cut out the eyes, nose, or other bits of the face in order to make it look more Halloween-y. Finally, put a candle or some sort of light to make it a true lantern.

As you can see, only really messed up psychos with iron stomachs will do this. Or, on rare occasions, the carver could be blind and not know what they're carving.

A Sub-Trope of Human Resources and a version of Decapitation Presentation. Not to be confused with Throat Light and definitely should not be confused with Pumpkin Person or Stingy Jack, as the two former tropes are about people with pumpkins/jack-o-lanterns for heads, while this trope describes unfortunate people getting their heads turned into jack-o-lanterns via crude mutilation. This is a Death Trope, so expect unmarked spoilers.