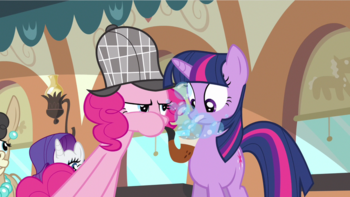 Do they even stalk deer on Equestria?
Advertisement:

A form of Stock Shout-Out to Sherlock Holmes, in which a character (usually of the Cloud Cuckoolander variety), when confronted with a mystery of some form, spontaneously produces a deerstalker hat out of nowhere and starts rattling off deductions.

The other characters are rarely surprised by the hat's presence, and in some cases, the hat might simply be part of an Imagine Spot and not actually there.

Inverness capes and Distinguished Gentlemans Pipes (Bubble Pipes in the case of child or childish characters) can also be used for the same purpose. It may also be accompanied by a large magnifying glass. The key elements of the trope are: